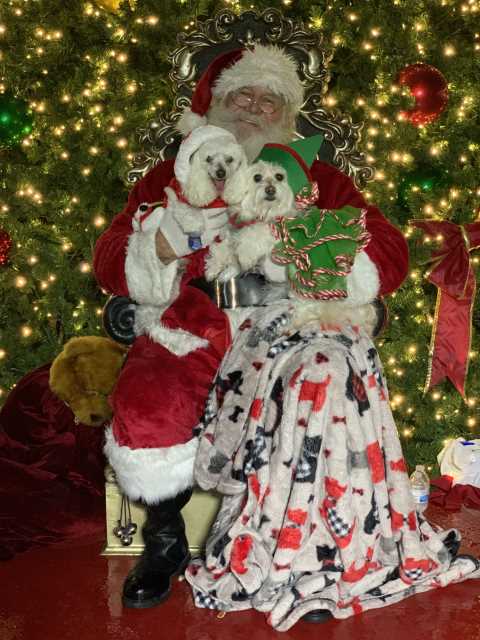 Santa Paws was a Paw-Some Time at The Village Shops on Venetian Bay!

On Thursday, December 12th, Naples dog lovers brought their furry, four-legged family members for photos with Santa at The Village Shops. Dogs of all breeds, shapes, and sizes were dressed to impress wearing everything from holiday dresses, Santa hats, antlers, bows, and more. As the line for Santa grew, the sound of playful pups could be heard all around the Christmas tree. Mrs. Claus opened up the photo line and greeted the dogs with a treat before leading them to Santa. The dogs were the stars of the show all evening long with puparazzi taking photos from every angle. After being rewarded with another tasty treat from Santa, the dogs and owners received their complimentary printed and emailed photo. The Dickens Carolers joined in with the sounds of the pups singing many popular holiday carols. The Humane Society of Naples also joined in the fun. The volunteers and the adoptable dogs educated guests on their mission and walked around interacting with other dogs. Around 7pm, Mother Nature had a different plan for Santa Paws. The rain came down in full force but Santa and Mrs. Claus weathered the storm as long as they could to ensure all the pups in line had a photo. If your pet was unable to capture a photo with Santa, there are three more opportunities! Santa will be taking photos with families and pets on Saturday, December 14th and 21st from 5-8pm and Tuesday, December 24th from 2-5pm.